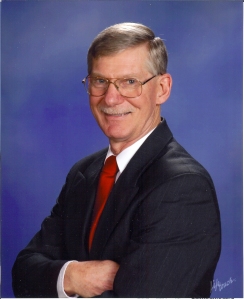 Bob turned sixty years old this week!  I can hardly believe I am married to a sixty-year-old man!  I guess I shouldn’t talk.  I am less than six months behind him—and he never lets me forget it!  To tell the truth, he neither looks nor acts like a man of sixty years, in my opinion.  He is only ten pounds heavier than he was when we got married forty years ago and still very physically fit.  Okay, I may have exaggerated a little when I said he doesn’t look a day over forty, and sure, he has some silver in his hair now and laugh lines etched in his face, but compared to most sixty-year-olds, or even fifty or forty-year-old guys, he looks pretty doggone good!

Bob is youthful in spirit, as well.  He still has that twinkle in his eye and that silly grin, and he loves to tease.  His “thing” these days is to sneak up behind me and make me jump out of my skin!  He claims he isn’t “sneaking,” but I’ve caught him walking mighty slowly and quietly, which in my book is sneaking!  I’ve warned him that one of these days he’s going to give me another heart attack, and since we have no life insurance on me, he’s going to be sorry, but he just laughs and a day or two later does it again!

He is a hard worker, but he loves to play, too.  He is Robbie’s best playmate and buddy, and is always thinking of games or making little toys that Robbie would like.  Rob can hardly wait for Daddy to come home, and his face just lights up when he hears his voice.  Our grandchildren think that Grandpa is the best playmate, as well.  They love, love, love to roughhouse with him—and in fact, when they know they are going to see him again in a few weeks, they start exercising to “get in shape to roughhouse with Grandpa!”  They love to play “Red Light, Green Light,” “Simon Says” and “Hide and Seek,” among other things.  “Hide and Seek” is fun to watch as the grandkids huddle en masse to look for Grandpa, knowing that when they finally find him, he is going to jump out and scare them!

I wish he had more time to “play” the things he likes to do—hunting, fishing, running…  Instead he is working hard to take care of his family and do for others.  He says he will never retire, and even if he could, I don’t think he would want to.  He’s worked from the time he was seven years old when he helped in his dad’s business, and responsibility and discipline are just a part of who he is.

These are the things that will keep Bob younger than his years until the Lord takes him Home someday, I guess.  He will never be a rich man, but he is a happy man.  He has a happy life and a happy wife, and children and grandchildren who adore him.  The Lord saved him and changed the direction of his life almost forty-two years ago, and Bob has never stopped praising and thanking Him since.

The Bible says, “The steps of a good man are ordered by the LORD: and he delighteth in his way.”  (Psalm 37:23)  When Bob gave his heart to Jesus in 1969, he also gave Him control over his life.  If any passage would explain Bob’s credo in life it would be this: “Trust in the LORD, and do good; so shalt thou dwell in the land, and verily thou shalt be fed.  Delight thyself also in the LORD: and he shall give thee the desires of thine heart.  Commit thy way unto the LORD; trust also in him; and he shall bring it to pass.  And he shall bring forth thy righteousness as the light, and thy judgment as the noonday.  Rest in the LORD, and wait patiently for him:” (Psalm 37:3-7)

Through the years I have seen how Bob’s example and faith have influenced and inspired others.  Over and over again we have seen people come to him and say how his testimony, either in word or deed, years earlier made a difference in their lives.  Even unbelievers have commented on how they admired the strength and steadfastness of his convictions and his stand for the Lord.  Complete strangers have come up to him and asked if he is a Christian as they noticed his walk and his talk.  Bob is always humbled by such comments and reminded that people are always watching how we live our lives.  Proverbs 22:1 tells us, “A good name is rather to be chosen than great riches, and loving favor rather than silver and gold.”  Never underestimate the power of a good reputation!

Bob’s obedience and faithfulness helped shape our children into godly people who follow Him faithfully as well.  There can be no greater blessing than this to a Christian parent.  He will leave behind him a legacy that will be a blessing and inspiration for generations of our family to come, should the Lord tarry.  And someday he will hear God’s words to him, “Well done, thou good and faithful servant!”

I am thankful for the helpmate the Lord has given me.  I may be feeling my almost-sixty years a lot more than he does, but having this young-at-heart man at my side (or sneaking up behind me!) will help keep me young at heart, as well!

One thought on “Three Score Years—And He Doesn’t Look a Day Over Two!”